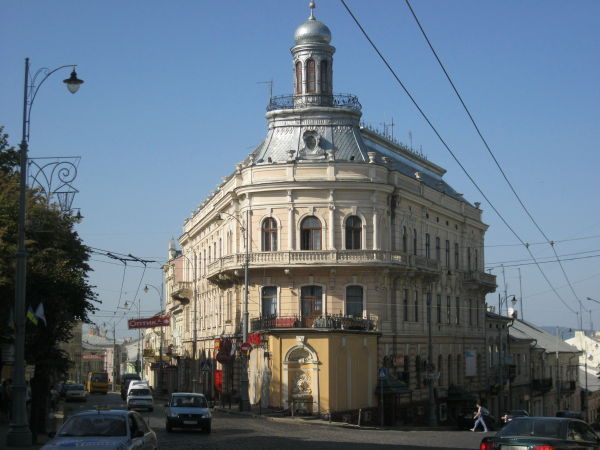 Eastern Europe is full of cities like Chernovtsy. Places where those that live there now are different from the people there before the war. But how can these cities connect to this past — especially if it happened in another language, in another empire? Chernovtsy has found the unexpected answer: a literary festival.

Chernovtsy is a small city in Ukraine. But history gives it different looks. The center is not crammed with hulking Soviet office blocks. This is a tiny Vienna. The buildings are neoclassical and art nouveau. The houses are freshly painted in imperial Austrian egg-yolk yellow and imperial Russian pea-green. The streets have the feel of the Danube and not the ex-USSR.

Before 1918 this was a Western bastion on the Russian border. Then know as Czernowitz this was the capital of the easternmost province of Austro-Hungarian province, Bukovina. This was a German speaking and mostly Jewish city. It was a city of writers — immortalized by Joseph Roth, Gregor von Rezzori and Paul Celan as the epitome of Mitteleuropa.

Bukovina was erased from the map and the memory of Europe. So have the people who once lived here. This orphaned Hapsburg city was first tossed into Romania with the treaty of Versailles; then found itself in Stalin’s Ukraine. Hitler had in the meantime exterminated the Jews and deported the Germans to settle the Greater German Reich in the north. The KGB snuffed out anything “un-Soviet” that remained.

Everything that made up Czernowitz was gone apart from the buildings. When Von Rezzori, the master of nostalgic works looking inward and back at 1920s Czernowitz like The Snows of Yesteryear, returned to the city in 1989 he fled as quickly as he had arrived. Cosmopolitan, i.e. Western Czernowitz, was now filled with Ukrainian “cabbage eaters.”

Not quite. Everything from Czernowitz was gone — apart from the books and the poems written. The only problem is that they were not in Ukrainian but German, Yiddish and Hebrew. It would seem a first glance an impossible task — to even connect Chernovtsy to Czernowitz, let alone make people proud of it.

This is where Eastern Europe’s most innovative literary festival comes in — the Meridian Czernowitz festival. The now annual celebration was the vision of Igor Pomerantsev, a native son and Russian language writer. The idea was simple: make people proud of Czernowitz by bringing European poets, grants and connections to Chernovtsy. Local business fell in love with the idea and rushed to sponsor a festival they saw as a way of branding their city as truly European — not post-Soviet.

Now in its fourth year Meridian Czernowitz is the most anticipated event in the Chernovtsy calendar. Every September writers and poets mostly from Israel, Germany, Austria and of course Ukraine arrive to celebrate the city’s heritage. It is a remarkable sight. Tel Aviv poets bring Hebrew back to abandoned synagogues, whilst Viennese writers preform in old Hapsburg theaters.

The festival allows Chernovtsy to take joy in the city’s German and Jewish literary tradition. Not only solemnly remember its destruction. Nor is this a fringe event — more than 7,000 people take part. For Chernovtsy’s students the festival is the highlight of the year. Midnight poetry readings in German, Russian and Ukrainian in what was once the Jewish Community Centre are crammed with hundreds of rapt students.

Every town and every village in Western Ukraine has a similar rich history. Most are blind to it. The few Holocaust memorials there are ignored. Politicians put them up to appeal to the German and American embassies more than anything else.

This is what makes the Meridian Czernowitz festival important. It is a living Holocaust memorial. By making German and Jewish writers come alive with a festival it makes the multi-ethnic past something not only something people can enjoy — but become proud of.

The city’s most famous poet was undoubtedly Paul Celan. He narrowly survived the war in the ghetto its Jewish population was forced into during the war. His parents did not. His family, his friends — his whole world — was destroyed in the Holocaust. Fleeing the incoming USSR first to Bucharest and then to Paris he committed suicide by jumping off a bridge into the Seine. His most famous poem — “Death Fugue” — is about the extermination camps.

Celan wrote about Czernowitz in the past tense. “People and books lived there once.” By the time of his death he believed Hitler and Stalin had made the culture of 1914 Czernowitz impossible. This what made watching forty people reading aloud Celan’s poetry in the courtyard below his old block of flats so moving. The books — if not the people — were being brought back to life.