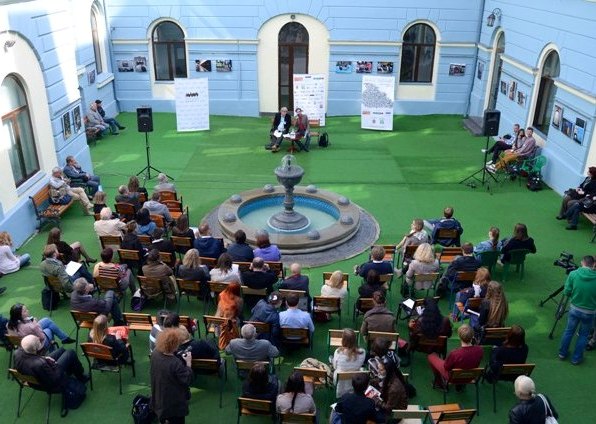 ‘The Subtleties of Organ Smuggling’, a short story by Serhiy Zhadan, is a series of interconnected sketches set on the EU-Ukraine border, where a rag-tag collection of pining lovers, gypsies and ageing prostitutes try to bluff their way over the Schengen line. As an awkward teenage Hungarian border cop searches through the contraband of Ukrainian women ‘smelling of life and vodka, talking in broken English and broken Russian’, he has to take away their surplus alcohol, take away their electric shavers and chocolate, take away their explosives and hand-grenades, take away their copies of Hustler (for his boss), take away their methylated spirits, cocaine, aromatic sticks smelling of hash, herbal oils with heroin extract for Thai massages, haemorrhoid suppositories, glass jars full of gypsy women’s hair for wigs, fish and human blood in thermos flasks, frozen sperm in empty Kenzo perfume bottles, grey slices of human brain hidden in plastic bags with Russian salad, hot Ukrainian hearts folded into fresh Russian newspapers – all these objects they’re trying to smuggle over the border in their rucksacks, bright canvas hold-alls, fake-leather briefcases and laptop bags.

Zhadan pulls his usual trick of starting in a realist mode and then building to a metaphysical crescendo, as the frontier becomes the border between disappointment and happiness, damnation and holiness, the desperate, destructive urge to cross it the articulation of love and desire as ‘dark as petroleum, and as sweet as death in your sleep at five a.m. in a beaten-up Volkswagen on the German-Polish border’.

Every September my family helps organise a poetry festival in Chernivtsi, on Ukraine’s border with Romania. Chernivtsi was once an Austro-Hungarian town (Chernowitz), then Romanian (Cernauti), then Soviet (Chernovtsi). It was the hometown of Paul Celan, Gregor von Rezzorri, Rose Ausländer, Aarhon Appelfeld, Olha Kobylianska and Mihai Eminescu. Poets come to the festival from Germany, Austria, Switzerland, Israel, Poland, Romania and elsewhere. Meanwhile, a lot of my friends in Chernivtsi take a more practical approach to their European identity: Romania, which still harbours regional ambitions, is handing out passports in the local administrative territory, and plenty of people are signing up. They’re not doing it out of sentimentality for Romania (or love of Celan) but because of the benefits of an EU passport. All of them have been to the EU and are perfectly aware of the Eurozone’s difficulties, but like the estimated millions of Ukrainians who work in the EU more or less legally, they would like to have a little less hassle getting over the border.

Across the mountains from Chernivtsi is Transcarpathia, the south-west corner of Ukraine on the Romanian/Hungarian/Slovak/Polish border. Austro-Hungarian geographers reckoned it was the geographical centre of Europe, halfway from the Atlantic to the Urals: there is a small pillar by a river to mark the exact spot. I made my first film, Eurovision Transcarpathia, about the region. Transcarpathia has been part of more than a dozen countries: during my journey I found the last inhabitants of German-speaking villages, recorded the songs of Poles, gulag stories of Hungarians, tales of Holocaust survivors, rants of Russian imperialists, independence ambitions of Ruthenes, lullabies of Romanians. I drank Soviet champagne with a mute Ukrainian grandmother who lived alone apart from her goat and cows on top of a mountain in an abandoned village: she seemed the most contented person I’ve ever met. When my sign language interpreter tried to explain to her the idea of my film, the only way to translate ‘Europe’ was as ‘a place where lots of people live’. The old woman thought it sounded awful.

Uzhgorod, the capital of Transcarpathia, is truly polyglot: as you walk down the cobbled streets, bustling with cross-border trade, you hear Hungarian, Ukrainian, Slovak, German, Romanian, Polish and the odd burst of Russian. The yearnings and ambitions of Eurovisionaries find their unforced, everyday realisation east of the Schengen border. ‘Where is Europe?’ I asked a blue-eyed girl performing a highwayman’s song by a factory near some dark, green Transcarpathian woods. She shrugged. ‘It’s where we live.’